For a while, I remained awake.

It felt like I had only just left home, but the readout told me Earth was now long gone. While I slept, wars had been fought and won. People were born. People died. More, like me, were sent out into space, naked in single-passenger pods hurtling towards calculated destinations. But they were calculated so long ago now. There was no guarantee our destinations would still exist by the time we arrived. While I slept, my pod kept logs of everything until it found nothing left to record. Earth’s end was a sudden interruption to my data feed.

So much time had passed, relative to what I remembered of time. My inertia never faltered. I would reach my destination on schedule. As I returned to sleep, I sighed. The fluid in and around me barely stirred in the bellows of my lungs. Still, I recalled the motions of breathing. They felt good.

The next time I opened my eyes, I saw the nebula and all its rings. A shimmering, bulging mass of blue and peach and purple. Like an oyster encased in layers of concentric shells. From this distance, it appeared still, suspended in the void like my body in this amniotic plasma. But my readout tracked vast fluctuations; pulses within pulses within pulses.

By the time a star produces a nebula, it is already reaching the end of its life. This nebula had already been around for a long time. I hoped I would not be too late to catch the white dwarf. It was a risk I knew I was taking when I departed. At best, we could only estimate how old this star would be, but we had no choice but to act.

I checked my vitals: elevated. That would do no good. I ordered the pod’s mood cortex to shift down, the visual cortex to reset my spectrum. I didn’t need to see the colours of this nebula. I needed to sleep.

I was awakened sometime later by a ping. Had one of my comrades veered off course? Did I even have comrades left? I answered the call. 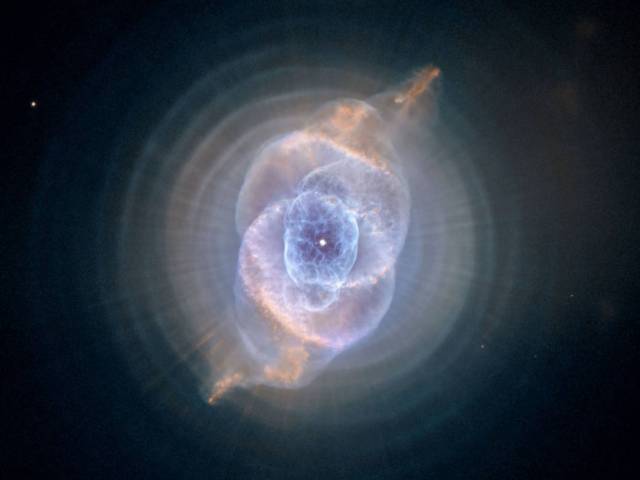 “Oh thank goodness,” came a voice. “I was starting to think your life support had failed.”

“Lt. Astrid Black, sir. I was sent from the colonies to rendezvous with your pod.”

But there were no colonies. Earth was destroyed.

“So much changed after you left. Let me send you a data packet. It’s everything we thought you might be missing.”

My chest heaved at the timestamps on Astrid’s data. To her, I was the benign force of a history imagined; the odd feeling you get when you set foot in a museum. Great grandparents hadn’t been born when I stepped into this pod. Yet still, here we were, she and I, holding a conversation.

Or was I asleep, dreaming a wishful dream that my homeworld was still alive?

Her records picked up where my feed stopped. Earth didn’t die when I thought it did, but what they now called the ‘Final War’, ended the broadcast to my pod. It broke out over what resources were yet unscathed by the changed, and still changing, climate. And once it was over, there was little left to save.

The lab that launched the pods completed a colony ship before the war was over. They settled in the mountains of Venus. Between them and Earth’s few survivors, mankind established three more colonies around Sol. One on Europa, one on Mars, and finally when technology had come far enough, Astrid’s home colony on Luna. Even under such duress, humans still carried on. I felt a pang of sadness, thinking of how much more we could have achieved had we not distracted ourselves with warfare and greed. In my eyes and face, the muscles twitched. But my ducts and sinuses were occupied by plasma. I had no room for tears.

She waited while I parsed each file. I found news clippings about every breakthrough in pod technology. Among them was a dossier on Astrid’s mission. Seven new pods were sent out to meet up with the seven launched in my generation. Finally, I reached a document stamped by the Star Council, the Earth Colonies’ new unified government. It was addressed to me by name.

“It’s your new mission, sir,” said Astrid. “We didn’t forget you. There’s been a change of plan.”